Is Christophe Part of the Coalition or not? 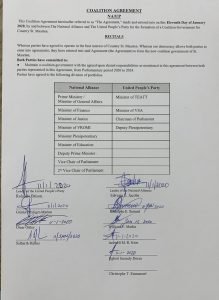 The unresolved signature missing from the working agreement to form a coalition can be seen as a slap in the face of National Alliance. Up until this moment no one seem to know but Emmanuel what his intentions are.  The MP have already went public to show his discontent with the formation of National Alliance and the United People’s Party, favoring a formation with the United St. Maarten Party.

In order to read into what will eventually be the outcome of him not signing the agreement, will be dependent on his actions and positions that he takes going forward as well as his language. Already in parliament he was severe in questioning the Interim Prime Minister and Formateur the leader of his party Ms. Silveria Jacobs, about the policy and decision making around who fails or passes the screening for candidate Ministers. From his line of questioning in that regard, the MP’s intentions were made clear; claiming that the process is not democratic which seems to suggest in his reasoning, that could be the reason why he is not a Minister today and by interpretation and his tone it’s something he is not pleased about.

Meanwhile the National Alliance MP remain leaning on the guard rails neither in the Governing Coalition Agreement nor have he declared himself Independent, therefore no one knows what to expect.