While the USA is grappling with trying to control the Coronavirus, the Caribbean should be bracing itself proactively for the likelihood of the disease coming to the Caribbean all be it not intentionally.

The Caribbean depends largely on the American tourist for business and, unaware, one or two can leak its way easily into the Islands and there’s no telling what could happen after that. 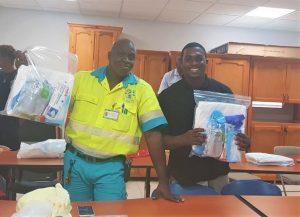 St. Maarten just recently offered some training to health workers who may have to deal with the occasional coming into contact with such a person, but is that enough?

This virus is more dangerous than a casual approach to dealing with it in a reactive way since it can become deadly for those getting infected with the virus. Those American passengers who were taken off the quarantine Cruise ship in Japan had among them a reported 14 cases that tested positive but were allowed to fly home to the United States. These affected persons will be no doubt quarantined further and treated in the USA but they are very much equipped for dealing with such cases, and it’s also possible that some who may be tested negative can later be tested positive. If someone arrived here and testing positive for the Coronavirus are we ready to deal with this? That’s the concern before us.

Corona Virus Training for Health Care Professionals. Is Christophe Part of the Coalition or not?