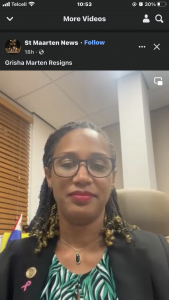 MP Grisha Heyliger Marten resignation from a party founded by her Husband, The United Peoples Party in a Facebook announcement Thursday, leaves everyone confused. Her announcement came on the heels of her removal as chair of Parliament, a move spearheaded by the leader of the UP party Rolando Brison and supported by the National Alliance MPs in the coalition.

MP Heyliger Marten in her defense felt that all of this was motivated as a result of one meeting of  Parliament when the Ombudsman gave a damning report of the VROMI Minister and her honoring the request to have an urgent meeting called to handle this matter. The MP also voted for the VROMI Minister to be sent home, indicating she was not prepared to protect the Minister because of her conviction, a decision not anticipated by the coalition; luckily the vote was not carried.

MP Heyliger Marten thanked all opposition members for their support then later the same day took to social media to announced her resignation from the UP Party. A party she says she cannot Identify with any longer and that she was the guiding force behind the party all along. what has the public confused is why did she resigned from her husband’s Party which he founded? her decision leaves a lot of open questions that only she can answer.

Ombudsman halts all Investigation into VROMI on (OTB)

The absence of data hinders sound decisions by Gov.

Grave concerns over VROMI Ministry and its functioning