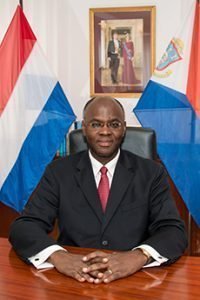 Elections moved to January 09th 2020 while presentation of list extended to October 03rd.

Harbour View – On October 3, 2019, His Excellency the Governor of Sint Maarten, drs. E.B. Holiday, received a draft national decree from the Council of Ministers regulating the amendment of the decree of September 23, 2019, to dissolve Parliament and call early elections. This is the result of the decision of the members of the Central Voting Bureau, given their concerns raised, to make their positions available by letter of October 1, 2019. Within the Kingdom of the Netherlands there is a basic democratic principle that once elections are called it cannot be revoked. A decree calling for elections and dissolving parliament within the constitutionally prescribed 3 months can therefore only be amended under exceptional circumstances. With the resignation of the Central Voting Bureau, making it impossible to organize elections within the time frame of the decree of September 23, 2019, such an exceptional circumstance has occurred. The Governor, after evaluation of the amended draft national decree and taking the new circumstances into account, signed the national decree which calls for postulation on Thursday, November 21, 2019, early elections on Thursday, January 9, 2020, and the dissolution of Parliament on Monday, February 10, 2020. The amended decree enters into force immediately.

The decision of Government to amend the national decree of September 23, 2019, follows considerable debate and disagreement within the community. Having reviewed the situation Governor Holiday, in keeping with earlier calls, strongly urges all involved – Parliament, Government, the Central Voting Bureau and the Electoral Council, each within their area of responsibility – to work together to take immediate steps to introduce electoral reform. Such reform should be a national priority to bring the National Ordinance on Registration and Finances of Political Parties and the Election Ordinance in line with the Constitution. This needs to be urgently addressed to once and for all bring an end to the unnecessary and recurring problems surrounding national decrees to organize early elections. Going forward, Governor Holiday appeals to all involved to join forces and work to address the challenges our country faces.