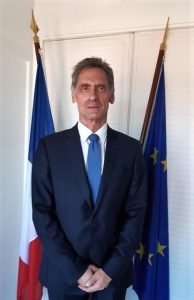 Mr. Prefect Serge Gouteyron is the new delegate prefect installed for Saint Barthelemy and Saint Martin in a ceremony held on Friday.  The New State representative takes over from Madam Sylvie Feucher whose term expires and was not granted an extension.

After laying a wreath of flowers in tribute to the fallen St. Martin soldiers who died fighting for France, Prefect Serge Gouteyron inspected the troops and was then presented to the elected officials, invited guests and the public in a brief ceremony. President Gibbs officially welcomed the Prefect and invited him into his office for a one-on-one constructive discussion for the good of the future of St. Martin; which, according to him today opens a new page in the relationship with the local State Representative. President Gibbs has had a rocky association with the previous state representative and would hope to build a better working relationship with the new Prefect. 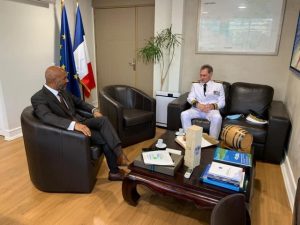 With the new Prefect taking office there have already been calls on social media for him to make changes. One such request made was for him to continue with the daily updates on Covid-19 which was stopped by his predecessor and was only made available on a periodical basis.

Look to the Heavens and hear Gods voice. Biting the Hand that feeds you.

Government to step up Economic Controls on Businesses