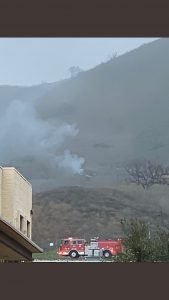 When the news was breaking Pepperdine graphics tweeted a picture of what looks to be a deadly Helicopter crash over Calabasas in California and that 5 people were injured at the scene. Shortly after it became clear that the world has lost one of Basketball Icon Kobe Bryan who was among 5 in his private helicopter that died on the scene.

Pepperdine Graphics, a student run newspaper, first showed this image of the helicopter and smoke in the distance even before the Los Angeles County Fire Department sprang on the scene Sunday and confirmed that 5 people died in the crash.

NBA star Kobe Bryan 41 and his 13 year old daughter Gianna (Gigi) were among the 5 that died in the crash. Just 11 days ago Kobe spoke to CNN of coaching his daughter. According to new information he  was supposedly on the way to a ball game with his daughter. Kobe Bryan played Basket Ball for the Los Angeles Lakers for the entire duration of his career.
###