How Lady Grace became the First Lady of Radio 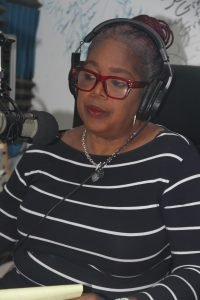 Before radio was as plentiful as it is today, there was only one, and that was PJD2 1300 AM. Back in those times it was the magical way of communication and entertainment that locked in every one who owned a transistor radio and men were the celebrities holding down those jobs as announcers. No one knew that from Aruba there was this one young woman Grace Blijden whose ambition varied, that would eventually be convinced to pack her bags and move to St. Maarten and later, would developed the urge of wanting to work in radio.

Before that happened however, Grace was always involved in various sporting activities on Aruba where she grew up and remembered her parents would always send her off to music classes weekly.  After graduating Filomena College MAVO 4 she was comfortable with the idea of wanting to work in the Hospitality Industry. That profession requires warm friendliness and good communication skills and boy, did she have it! After all, she was a talkative person, at times talking herself in and out of trouble.

By 1984 Grace would then be on St. Maarten and settling down working in the Hospitality Industry. At which time Tourism was on the rise on the Island, and people were making lots of money. Grace would recall working at some of the land mark businesses on St. Maarten from the Windmill Restaurant to Spritzer & Fhurman Jewelers at Mullet Bay. She would eventually get the chance at radio and began thinking her musical background would help her be a good candidate announcer. Grace reached out to management of the only radio station at the time, and was afforded the opportunity to familiarize herself with the technology and the equipment used in Radio. After a few weeks of training Grace was offered an evening shift; as she got better at it, the mid-morning slot opened to her; she then became the first woman announcer among the men that goes by the name “Lady Grace”.

She was able to personalize the morning drive time show over the years with the type of programing content that made her very different from the many morning shows that came on stream after radio stations began mushrooming on the island. We have more than a dozen FM radio stations now and most of them have their morning shows but The Lady Grace morning show on 102.7 FM was able to hold its own among them all. It was evident that there must be something special about her that gave her the right to be called the first lady of Radio.

When you choose a job you love, you would never have to work a day in your life; Lady Grace quoted a Chinese Philosopher “Confucius” to make the point that what she does is not a job. Although it pays the bills, for her, this is not work; it’s what she love doing. Lady Grace says she carefully chose what she believes will keep her listeners tuned in, by reading the Headlines in the papers daily. And because of those with disabilities, for them she is their eyes and ears. The health watch segment in her morning show is designed to educate listeners about how to stay healthy.

She is also convinced lots of people depend on their horoscope to get their day started and nothing is better to follow up with the inspirational quote of the day, Trending Topics and of course The Breakfast Lounge. “I don’t serve Breakfast, but I serve up some interesting Interviews to keep my listeners tuned in.”

Lady Grace is not only the longest running woman Radio announcer but she has been honored and received several awards as the first lady in Radio for her contribution over the years, and has earned the right to be called the first lady in radio on St. Maarten. The radio personality has been holding down the morning drive time shift as the announcer to wake up to in the morning. She would share everything of interest to the listening public while on their way to work, or just up in the morning and keeping up with the latest information and tips to help get their day started.

In all of her accomplishments grace says she place God first above all else. Prayer and family life is a major part of her lifestyle. As for her motivation for doing the show every day? she says “I keep reinventing myself” and that makes her show stand out among the rest.