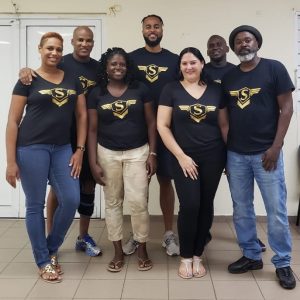 Citing SCDF can do more to help promote local Shows

PHILIPSBURG—After setting the Soca tempo for Carnival celebrations on St. Maarten for five (5) years, Grisha Heyliger-Marten has thrown in her rag, effectively resigning from the famous “Soca Rumble.”

Since April 2015, Grisha and at least five others including Omari Ferrari, the man she said was the brainchild behind Soca Rumble, promoted local talent and music during Carnival. Their primary objective was ensuring the St. Maartens artists had an avenue through which they could channel their love for Soca. Fittingly, the motto for the Soca Rumble crew was “SXM Soca to the World.”

The Soca Rumble group are all lovers of Soca Music who were also skilled and experienced in hosting major events.

“I gave it a good run and left Soca Rumble on a high note. However, based on my new goals for the future, I have decided it is time to make the change now.” She did not say what her new goals are. However, she quoted a bible verse from the book of John Chapter15, vs 2, “Every branch in Me that does not bear fruit, He takes away, and every branch that bears fruit, He prunes it so that it may bear more fruit.”

Heyliger-Marten leaves Soca Rumble as a well-oiled machine that is known for promoting local Soca Music and the creation of local Icons. Soca Rumble is also known for efficiency and professionalism in developing and producing the event each year.

The Soca Rumble team consistently ensured that the show started and ended on-time and all payments relating to the event were made within two weeks after the show.

She explained that one of the challenges of hosting the show was only getting timeslots for weekdays. The local event hardly ever got the honour of being held on the weekend as much as the international shows did. One of the things she hoped to accomplish was creating a greater sense of pride in local Soca talent amongst the population, especially organizers of Carnival.

“St. Maarten has a wealth of talented people, and a show like Soca Rumble should receive a permanent spot on the weekend. If that is done, more people can come out and witness the local artists performing without having to worry about work the following day.”

“In other countries such as Trinidad, Soca music is cultivated from within and they are given preference,” said Heyliger-Marten.

Another concern is the number of VIP tickets, which the St. Maarten Carnival Development Foundation (SCDF) has distributed to its sponsors over the years. VIP tickets cut into the revenue pool and make it especially tricky for promoters to profit. In many cases, companies receive fifteen, twenty and more VIP tickets for sponsoring the SCDF. Sadly they usually do not sponsor Soca Rumble and other events. Many businesses opt to support international shows, and very few support local events. “Trust me,” she said, “the crowd does not reflect the revenue generated because many of the people at these events enter on VIP passes.” Heyliger-Marten said these issues also affected her ability to produce the show Sabor

Latino, which she hosted for four years. While she originally intended to host that event for five years, it was simply not financially feasible to do so.

“I decided to work with the local talents on Soca Rumble because I wanted to give back to my community. I have done this for five years despite the challenges financial and otherwise, but I cannot continue to carry the cost. I want to encourage the SCDF to do more to support local shows and talent. I would like to see the kind of support for a local Soca show that went into hosting several other shows this year.”

Soca Rumble Ends on a high note but according to Heyliger-Marten, “the foundation for promoting Soca music is set. The only thing anyone who wants to continue the promotion of local talent has to do now is keep building St. Maarten’s Soca music. She hopes that another organization would continue with the events, and the local artists will continue to produce great soca music. “But respectfully I ask that you give it a different name.”

“I want to thank the businesses that supported us over the years. I want to thank especially those loyal Soca supporters who stood by Soca Rumble throughout the five years of its existence. Your support was inspirational and made us work harder to do better each year,” said Heyliger-Marten.

How Lady Grace became the First Lady of Radio What is Life all about?…