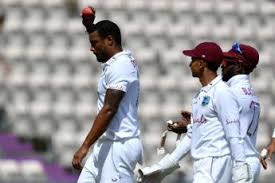 The West Indies historic win after COVID-19 break, draws positive and proud comments from the likes of Viv Richards. West Indies beat England by four wickets in the opening Test of a three-match series to take a 1-0 assailant lead. The Windies were set a target of 200 on a pitch that was 5 days old; West Indies relied on Jermaine Blackwood’s calm demeanor and some resistance from the middle order to seal the Win.

Blackwood fell just 5 runs short of what would have been a memorable hundred for him if only he had remain patient enough to get there. Jermaine Blackwood hit 95 and took the Windies closer to victory after Jofra Archer threatened to disrupt their chase by cleaning up the top order for just 35 runs. But Holder’s men held on to carved out a memorable win on cricket’s return to action.

They were widely praised from all circles for their top-notch performances and many West Indies legends, including Viv Richards, Darren Sammy and Ian Bishop, also took to social media to applaud their effort. Jermaine Blackwood, Shannon Gabriel and Captain Jason Holder shared in the effort to help West Indies beat England by four wickets.

The defeat was the first time England have lost the opening match of a home Test series since 2003 while West Indies opened their ICC World Test Championship points account with a sensational win. It was a complete team performance with many chipping in with notable performances throughout the Test match. Here is how West Indies legends reacted to the win: “Congratulation West Indies for a dominant win over England”. “You make us proud” –Viv Richards.