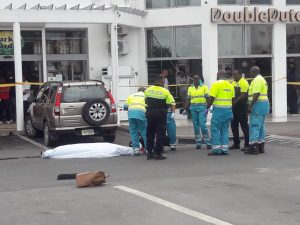 This man reportedly was shot Sunday by an unknown robber who according to a police report was murdered Sunday afternoon during a robbery. The police reported that the Ambulance and the police patrol were sent to the Welfare road Sunday afternoon March 22nd at approximately 02:00 PM where they found the male victim suffering from a gunshot in front of a supermarket.

According to the information police gathered at the scene, the victim was sitting on his scooter when he was approached by an unknown man brandishing a firearm and requesting him to hand over his scooter. During the robbery the victim suffered a gunshot wound to his upper body. After injuring the target, the robber fled the scene with the scooter heading in the Simpson Bay direction.

Shortly after the paramedics arrived they started administering CPR but could not revive the victim. The doctor who appeared some time later pronounced the man had died from the gunshot wound he received. The suspect remain at large while the investigation is continuing.

Message to Rutte, Knops and Girardin