Preclearance not out the window but expensive says Geerlings 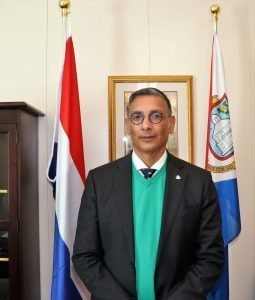 The Finance Minister Mr. Perry Geerlings says the preclearance issue at the airport is not a 1 2 3 process and the confusion that prevails among the community is unfortunate. Geerlings was at the time interviewed on People’s Voice Sunday morning talk show.  Geerlings admitted that the process leading up to the Airport handling US preclearance is a lengthy one and although this was been handled pre Hurricane Irma when it was initiated by  the then William Marlin government, not even the wording of the  protocol and the agreement by Dutch and American authorities are finalized.

As Minister of Finance he said he can’t even confirm what the financial benefits are for St. Maarten since there are no details to look at for him to verify what it would look like. He said on behalf of this government he was able to look at different models from Aruba to other countries that handles preclearance and it seem the steps and agreements for handling such would be different for St. Maarten when it comes to the cost. More than two thirds of the cost for handling preclearance would become the responsibility of St. Maarten and that raises the question of how feasible it is for St. Maarten at this time.

Although the Council of Ministers and the governing program has preclearance as a priority, it will be an expensive undertaking for the Island and it shouldn’t be confused with the importance of the reconstruction of the Airport which he said should be tackled urgently. The Finance Minister says while the Airport is at liberty to consider any form of financing on their own the Government was approached to seek financing from the Dutch Reconstruction Fund (trust fund) and the European Development Bank for the rebuilding of the Airport and that was successfully approved and is about ready to get started.