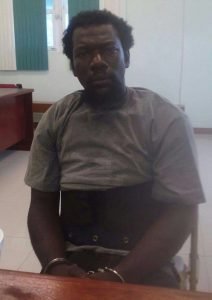 The Public Prosecutor Office is reporting of the launch of its new website. The site also has the story about what has become of the dangerous Cuchi who was jailed escape out of Prison and recaptured on the Island of St. Kitts. He was known to be responsible for multiple murders on the Island. He is sentenced to spend the rest of his life behind bars. This is the worst penalty that is handed down to a criminal in the Dutch Kingdom that doesn’t support the death penalty. https://www.cmoorejournal.com/2017/08/07/cuchi-back-behind-bars-after-arrest-in-st-kitts/

The Public Prosecutor and the Court of St. Maarten has sentence the dangerous Kathron “Cuchi” Fortune on June 05th 2019 to life imprisonment for manslaughter and murder. He was the main Suspect in the Mars Investigation. Cuchi remains in Prison in the Netherlands.

The Court found Cuchi guilty for manslaughter of one victim and the murder of another; removal of their bodies and the possession of firearms. The two men Sarante Diaz and Rosario Contreras were killed on the 05th of December 2016 and their bodies dumped in the Belair Lagoon where they were discovered on August 01st 2017

Co-defendant T.F. was sentenced for 30 years for his role in the manslaughter and murder, removal of their bodies and possession of fire arms. In accordance with the Public Prosecution Service, the Court found it proven that T.F. was an active accomplice assisting in the planning and the execution.

Another suspect K.S. was sentenced for 8 years in Prison for Murder.  Also in accordance with the Public Prosecution Service, The Court found it proven that K.S. was complicit in the manslaughter and murder in the Simpson Bay Resort hotel room.