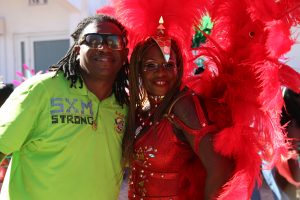 Goddess of Carnival Reign Supreme…open up about her disappointment with the SCDF.

Pauline Gumbs one of the many loyal Carnival revelers who have always graced the streets of St. Maarten for Carnival year after year, is disillusioned about Carnival 50 and what she sees happening. She says Carnival is in her bones and it shows when she has over the years represented the Island playing mass several places in the world including New York, Miami, Aruba and Curacao. The Goddess of Carnival was speaking about her vision of how she was planning to celebrate Carnival 50. She told cmoorejournal.com she was looking forward to a Grand Parade through the streets of Philipsburg with a costume depicting images of some of the past revelers to help celebrate the 50th Anniversary of Carnival with emphasis on highlighting the memory of their contribution over the years.

But she was duped into believing the SCDF was going to live up to a promise made that for the 50th celebration they would have selected 12 loyal revelers (she being one) whom they would either provide their costume in full or sponsor half of it as part of a plan to invest into making the Special 50th Carnival Celebration an exceptional one; Up until now the foundation did not live up to their promise. The Carnival Loyalist says out of her love for jumping in Carnival and Cultural Parades, she would make it her duty to comb her support base every year for sponsorship to make sure her participation would be one of Splendor and Attraction. This time however, she found herself following up on a promise from the SCDF that never came.

She is disappointed about how the SCDF seem not to be showing any interest in keeping the cultural celebration (Carnival) alive by encouraging the input of traditional cultural contributors to continue supporting Carnival, but are leaning heavily on the money shows featuring International performances from mega stars. That’s not our Carnival Pauline Gumbs said. Our Carnival should depict our culture, the SCDF is disrespecting the importance of the input necessary from all our local Calypsonians for the 50th Carnival landmark by not considering their choices to perform. They have outstanding payments and trophies for both her as well as others who have participated in Carnivals of the past and according to the reigning Queen of the Band, she don’t understand how the Carnival Committee can have a carnival every year without first settling their past debts with others who were awarded prizes for participating in the annual Cultural event. Their Gala celebration this year clearly showed favoritism by honoring people of choice while showing disrespect for some who deserve to be honored.

They are constantly claiming they are in the red; but how can they be, when they are making all this money from the International nights where their focus seemed to be centered, she asked? When you look at the preparations for carnival and the appearance and presentation of the village, it’s all about big business rather than a cultural celebration.  They are sure to make money but give no account for it. Pauline noted, she was informed that for this year the SCDF is already saying they don’t have money for prizes; if that is true, it is difficult to understand. She can recall years gone by when the carnival committees then, would have given out their prices on the last night of the carnival and report soon after how much they have made. This carnival committee on the contrary has a record of always having outstanding debts but the evidence of the village and its patrons shows that it must be a profitable venture.

The Carnival enthusiast  says she expects the Foundation to treat patrons fairly and respectfully while supporting the culture of Carnival and not making everything appear to be big business while shunning the local participation of those who make carnival what it is each year. Although she never got her trophy for Queen of the Band a couple of years ago, she still reign supreme. When asked about her feelings for the Carnival 50 Celebration, she answered “I’ll be honest with you, I am not feeling it” she sighed and repeated, “I’m not feeling it”. But In spite of the bad side of the debauched experiences for Carnival 50 this year, she is not prepared to let it dampen her spirit to play mass even if it means having fun in a simple costume.