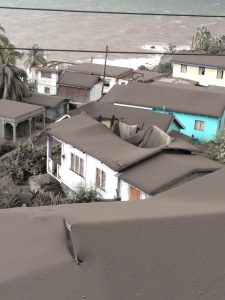 Citizens return to shoveling ash from streets, yards and rooftop to salvage what little of their lives remain.

On the 12th of April 2021 the people of St. Vincent run for cover after La Soufriere Volcano erupted dumping ash over a greater part of the Island including its main town of Kingston. The Prime Minister of the country was fore warned after movements in the crater was detected and called for its citizen to prepare for evacuation to neighboring Islands and to designate shelter in the safer parts of the Island. Some citizens hesitated to consider moving citing that in 1979 the first time it erupted the island survived that eruption thinking this one would be the same. This was proven wrong since this time the damages were far greater. 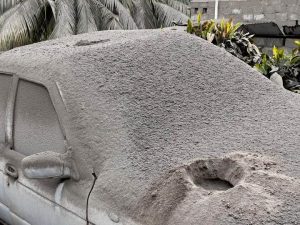 There have been periodic eruption that caused the situation in St. Vincent to become a humanitarian emergency. Some 20 000 persons on the island have been displaced and may never would be able to return to their homes; others were seen removing ash from their roofs in an attempt to re-settle, while government officials move around the country carrying out assessments of the damages. Ash on the public roads at times measuring well over 12 inches were spread over crops houses and a greater part of the surface in the red zone.  Usually when surveying these types of disasters one would be counting the loss of lives, such is not the case for St. Vincent which is certainly good news but the losses described by the minister of finance could well be over 50% of the island’s GDP.

In the meantime St. Marten was used as a transit point for citizens from The USA and Canada on their way to safer ground. They arrived here on Saturday on the Royal Caribbean Cruise vessel as they make their way to their original country of citizenship.