Catch a glimpse of the red Planet Tonight 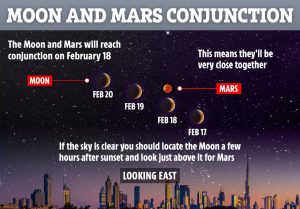 Today February 18th Mars is set to be visible to the naked eye and it will also be in conjunction with the Moon. It is a strange coincidence that it was just today project Perseverance from NASA landed on Mars.

The Moon will be 42%-lit this evening meaning Mars should shine bright enough to be clearly visible. This means you will be able to use the Moon as a guide to spot the Red Planet in the night sky, on what is set to be a historic day.

Mars rises just after sunset so warm yourself up and look for the Moon when the sky is dark. Around two hours after sunset, you should spot Mars just above the Moon and shining like a reddish star. Use Binoculars to take an even closer look at the Red Planet and if you imagine Nasa’s Perseverance you might just see it as it has already landed on Maars. 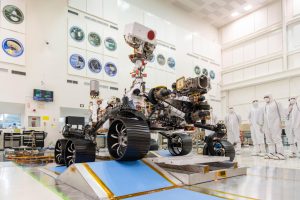 This is the Perseverance vehicle used by NASA to move around the planet. The six wheeled rover is the size of a small car and will be sending back radio transmission to Earth. Mars is the fourth planet from the Sun.