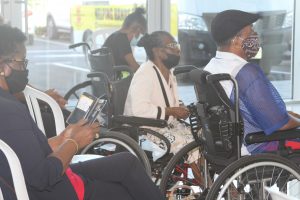 It is not very often we see any type of attention being paid to the seniors or anyone in our community that are confined to a wheelchair. Some of these folks find themselves for whatever reason, having to limit their mobility to a wheelchair and end up been a burden at times, to others when having to move around. 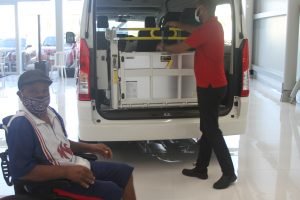 These people are living human beings that unfortunately, because of various reasons, are in this position and deserve the freedom to move around and enjoy such privileges like everyone else. Here is where the Helping Hands Foundation comes in. The foundation, its board and volunteers have reasons to celebrate, since good fortune came their way this February and an over ambitious president who sets his hope so high to believe that one day, they will own a wheelchair bus to shuttle their clients around the Island both for excursions and to other places of importance that would have been difficult otherwise.

Finally after much ups and downs, The Helping Hands Foundation can celebrate with a toast after having received the keys to a wheelchair bus which is a major contribution to the foundation when working with their wheelchair patients. The bus is equipped with a hydraulic ramp to easily load a wheelchair without the patient having to be removed from the chair.

The Foundation President Mr. Antonio Rogers said he first encountered difficulty convincing the dealer Real Auto that they would be able to pay for the bus. Rogers confirmed to the small gathering, that he being the type of person who believe in taking calculated risk, and that is exactly how it looked when going about making his wish possible; he however had the feeling that his hard work would pay off; and besides, he had the backing of his Vice President Ms. Josianne Artsen who believed in the vision. 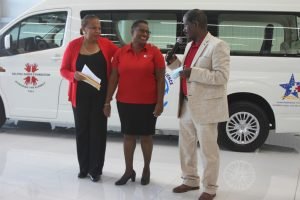 While thanking all the donors, who were all present to witness the hand over, they express gratitude for answering the call and also acknowledged the importance of such a generous donation to these special group of citizens who quite often are forgotten when constructing our community infrastructure. The dream is now a reality, and to top it off, a confirmation came from the dealer pledging free service and maintenance to the vehicle for a period of three years.
###

For Rent For Sale and For Lease a blow for business. Court orders prosecution of an MP in Ruby investigation

From picking up trash to Climate Advocate

St. Maarten in better times; before Irma and COVID-19