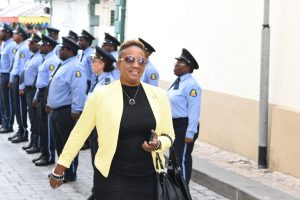 Installation of new council of Ministers with Silveria Jacobs as Prime Minister to be sworn in Tuesday with specific instructions from Governor Holiday. This full text of the Governor’s press release is herewith published.

The formateur has accepted the commission to form an interim government supported by a majority in Parliament comprised of the NA-fraction, the USP-fraction, and independent Members of Parliaments L. Mercelina, C. Brownbill and R. Brison. The new government consists of Ministers who will, amongst others, give priority to conclude the legislation regarding the combating of money laundering and financing of terrorism, to execute the agreements made with The Netherlands regarding the financing of the national recovery of Sint Maarten, including the financing of the rehabilitation of the airport, to further prepare the execution of the elections, to take steps to realize electoral reform by bringing the Ordinance Registration and Finances of Political Parties and the Election Ordinance in accordance with the Constitution, and to concluding the budget for 2020.

Candidates for the various portfolios have been vetted based on the pertinent regulations regulating the pre-screening of candidates before nomination (National Decree Appointment procedure candidate Ministers and candidate Minister Plenipotentiary, May 22, 2013, No. LB-13/0442). The formateur has nominated the following persons for appointment:

The Governor has scheduled the appointment and swearing in of the Ministers on Tuesday, November 19th, 10.00 hours, at the Governor’s Office. After the ceremony, the Governor and the newly appointed Ministers will have the constituting meeting at the Government Administration Building.

Was Brison duped or in a better position to shine? Interim government led by Jacobs sworn in…