While the anti-Poverty Platform is complaining that Government is not doing enough to help citizens out of their misery,  The NRPB says, they are about to start repairing homes.

It’s been one year and eight months since hurricane Irma devastated the Island of St. Maarten and in between a series of events and political wrangling between Dutch politicians and the local government, it now seems clear that its way past time for help to reach to the many citizens that are still awaiting assistance to have their homes repair.

The Dutch government made 550 million dollars available for the reconstruction of the Island, the repairing of homes and the reinforcement of shelters among the many social projects that are necessary for the country to get back on its foot again. A decision by the government in Holland was to make this money available through the World Bank an institution that was not familiar to the government of St. Maarten and the money has been parked there ever since. 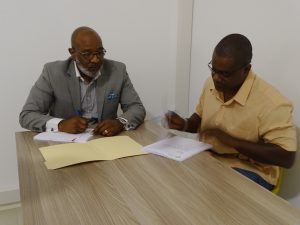 The National Recovery Program Bureau which was set up by the World Bank to manage these projects is only now announcing that the home repair program is starting; all this time citizens have been living in substandard conditions with tarpaulin on their roofs and awaiting to tangibly experience some hope of putting their lives together again.

Meantime, The Anti-poverty Platform and Sint Maarten Consumer Coalition, has been echoing the call for the human rights of citizens on St. Maarten in the Kingdom of the Netherlands to be addressed. On the radio program on which  they appear, they confirmed of having been bombarded with lots of complaints from senior citizens of not receiving any help, and questioning what has become of the Trust Fund money from the Dutch government to build back stronger and better.

This past Wednesday, May 8th Director of the National Recovery Program Bureau, Claret Connor, signed contracts for the Home Repair Program of the National Recovery Bureau and the Government of Sint Maarten to begin. The question is, why only now when citizens are praying and hoping that for the start of this hurricane season (June 01) they won’t have to be dealing with any storms while their homes have not been repaired since September 2017.

According to the NRPB, while the first works are starting only now, preparations are also under way for the next batches of private home repairs, including the tender process for technical assessment and repair works. The registering for the home repair program closed on April 26 and the social assessments of all applicants are now being finalized by the NRPB. This includes a check on the Government established qualification criteria; in order to qualify for the home repair program, the applicant must (1) be a legal resident of Sint Maarten, (2) legally own the house that requires repairs and (3) have a monthly income of no more than Nafl. 4,000.

At this moment, the NRPB is reporting that about 175 households have been qualified for support under the home repair program. Therefore, the question that must be answered is: what will happen to the many households that do not qualify according to the standards set by government? Are they to remain in their poor and inferior condition?

The Home Repair Program, is a project activity that falls under the St Maarten Recovery Reconstruction and Resilience Trust Fund, financed by the Netherlands and managed by the World Bank.

Elton Jones… What will Carnival be? Johnson wants Audited Financials from SCDF