On the popular Sunday morning program People’s Voice former Minister of VSR Pamela Gordon Carty says the absence of no plan for the country moving forward, puts our politicians in a bad position to negotiate with the Dutch. Her comments came when she responded to a question asked about the COHO law which for some it is interpreted as a package of reform measures for the Caribbean part of the Kingdom that otherwise would not be enforced for the Islands, had it not been proposed by the Dutch with the aim to make the Islands become more sustainable. 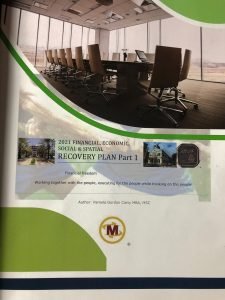 The former Minister admitted while she is not in agreement with the COHO, in defense of her position, she referenced her Recovery Plan written in a book she authored called “2021 Financial Economic Social & Spacial Recovery Plan part 1” as something  the Islands can work with to give us financial freedom. The Caribbean part of the kingdom have been receiving liquidity support since the COVID-19  pandemic, and linked to this financial support from the Dutch, is the COHO Law. When you don’t have a plan says Gordon Carty you can’t negotiate with the dutch; therefore they will force these measures on you.

The former Minister certainly have not gotten the credit she deserve; she spent just about 6 months in office (October 2019-March 2020) as Minister of Health Labor and Social affairs and within that period of time was able to Identify a number of factors and realities outlined in her book that are contributing to our downfall as a country. She was credited as one of the only VSA Minister to have tackle the rot of employment and unemployment of our locals that currently exists in our system. After leaving Office, to this day, she is remembered for her proposed policy which she intended to put in place before the Government fell and she was out of office. She continue working and came up with an agricultural plan to create jobs and inspire sustainability in employment for our citizens.

Pamela Gordon Carty hold to her plan as a negotiating tool and as a position of strengths to negotiate with the Dutch about what we want and what’s good for our Islands. We should have a plan because we are the ones who should know what’s good for us. For now our politicians are going along to get along and having no plan as to where we are taking our people. The picture doesn’t look good, it appears that the Dutch will decide for us with the implementation of the COHO Law.